YOUR PARK NEEDS YOU!
And you need your park… to be litter free.

If you can spare a little bit of time to work alongside others in your community to ‘Pick It Up and Bin It’ then together we can be part of the litter solution. Find out how you can get involved. 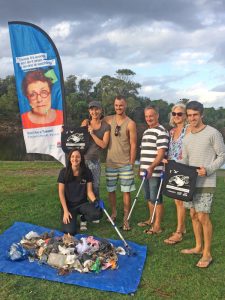 The ‘Pick It Up and Bin It’ park project aims to help create a culture of litter awareness and prevention by building the capacity of the community to be leaders in the care and guardianship of their environment.

Clean parks, clean waterways, clean oceans and a cleaner world begin with actions as simple as ‘Pick It Up and Bin It’.

This initiative to reduce and prevent littering is funded through the NSW EPA Waste Less Recycle More initiative. It is part of the successful ‘Don’t be a Tosser’ campaign, which calls people out for the excuses they make for not taking responsibility for their litter.

The Dirt on LITTER

That litter damages our natural environments, harms wildlife and sea creatures, can injure people and makes our spaces unpleasant and less healthy. Cleaning up litter also costs taxpayers a lot of money.

In the Northern Rivers so many of our beautiful parks and open spaces are close to creeks, rivers and the ocean. That means that littered items don’t have far to travel before they end up entering and polluting our waterways.

It’s time to “THINK GLOBAL”  –  an estimated 6,000,000 tonnes of debris enters the world’s oceans every year!! and  “ACT LOCAL” by teaming up with a local  ‘Pick It Up and Bin It’ crew because a cleaner world starts right here on our doorstep.

If  littering from vehicles makes you see red…. 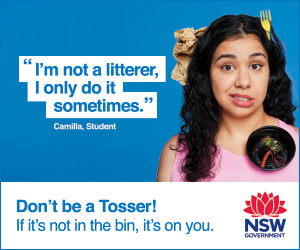